A timeless love story with choreography that sizzles. 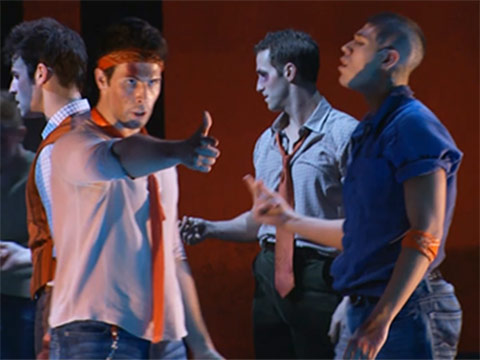 More than fifty years ago one musical changed theater forever. Now it’s back and mesmerizing audiences once again. From the first note to the final breath, “West Side Story” soars as the greatest love story of all time. This revival, based on Tony Award-winning librettist Arthur Laurents’ Broadway direction, remains as powerful, poignant and timely as ever. The Bernstein and Sondheim score is considered to be one of Broadway’s finest and features such classics of the American musical theatre as “Something’s Coming,” “Tonight,” “America,” “I Feel Pretty” and “Somewhere.” As the Associated Press says, “West Side Story remains Broadway’s best dance-driven musical. Five decades have not dimmed the extraordinary choreography or the score that pulsates throughout.”

"This fresh, bold production is so exciting it makes you ache with pleasure. It’s both airborne and transcendent." — John Lahr, The New Yorker

West Side Story is recommended for ages 13+. Please be advised that there is strong language, violence and some sensitive subject matter that is true to the story and plot. Parental guidance is suggested.