The high and lonesome sound of the Appalachians meets the hot and lively jazz of New Orleans.

Since opening its doors to the public in 1961, Preservation Hall’s mission has been to showcase the national treasures of traditional New Orleans jazz music. Forty-eight years later, the Preservation Hall Jazz Band still represents the best opportunity for music fans the world over to experience the planet’s happiest music. Boasting a direct lineage from the earliest incarnations of New Orleans jazz, the current roster of the Preservation Hall Jazz Band features some of the Crescent City’s finest and most exciting musicians. These unforgettable, multi-generational players proudly carry on the traditions passed forward from the most prolific jazz heritage on earth.

The Del McCoury Band is a worldclass bluegrass ensemble that performs original and traditional compositions with eloquent harmonies and “ferocious, purebred musicianship” (USA Today). With more than 30 trophies from the International Bluegrass Music Association Awards (including nine for Entertainer of the Year) and multiple Grammy awards and nominations, they’re the most honored group in bluegrass history. The Del McCoury Band has earned the acclaim of colleagues throughout the music industry, ranging from Dierks Bentley to pop star Bjork to jam band favorites Phish.

Together in concert, the Preservation Hall Jazz Band and the Del McCoury Band create a seamless blend of soul-lifting traditional harmonies as the high and lonesome sound of the Appalachians meets the hot and lively jazz of New Orleans. Don’t miss this thrilling and very special opportunity to witness the coming together of two legendary groups of musicians from two distinctly American musical lineages. 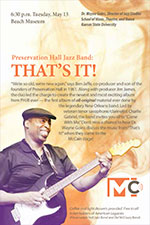