Timeless and historic rock and roll!

After Creedence Clearwater Revival disbanded in 1972, founding members and Rock and Roll Hall of Famers Stu Cook and Doug "Cosmo" Clifford remained close. Realizing both missed playing live Creedence music that had been lying dormant, Doug and Stu put together Creedence Clearwater Revisited in 1995 to perform in concert the hit songs — touchstones of a generation. Hear classics like "Susie Q," "Lodi," "Proud Mary," "Down On The Corner," "Fortunate Son" and "Who'll Stop The Rain!" 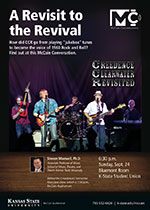