The Brian Setzer Orchestra brings their Christmas Rocks! 10th Anniversary Tour!! to McCain Auditorium. With a career spanning more than 30 years, Setzer has smash hits as founder/leader of The Stray Cats, his 18-piece Brian Setzer Orchestra and as a solo artist. His Christmas concert will include Setzer’s legendary guitar magic on hits such as “Rock This Town,” “(She’s) Sexy +17,” “Stray Cat Strut” and “Jump, Jive and Wail” and lots more, as well as his re-imagined and acclaimed holiday classics.

Three-time Grammy-award-winner Brian Setzer is a “musician’s musician” credited with consistently taking chances with innovative and daring musical styles, while single-handedly resurrecting two forgotten genres of music (rockabilly in the ‘80s and swing in the ‘90s). Along the way he has scored chart-topping hits throughout his decorated career as founder/leader of the Stray Cats, his 18-piece Brian Setzer Orchestra, and as a solo artist.

If that wasn’t enough, Setzer found tremendous success in redefining Christmas music for a generation desperately desiring something new and exciting around the holidays. The result was three best-selling holiday albums (Boogie Woogie Christmas, Dig That Crazy Christmas and Christmas Rocks!: The Best Of Collection) and an annual Christmas tour that has certainly become the most exciting annual rockin' Christmas event on the planet. The Los Angeles Times calls it a show “whose sheer joy is irresistible!” 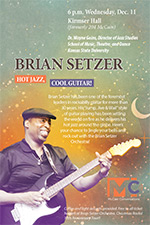